Why Donald “Trumps” Clinton Is Good for Western Canada

I must write my November article with at least a passing observation of the election of President – Elect Donald Trump, and what it means to the world economy and politics. It’s interesting, that whether you’re American or Canadian, people were bullied or embarrassed to admit support for Trump.

His victory is not all surprising after all the weak policies of Obama. The setting was right for Trump as it was for Reagan taking over after Carter. The macho part of America was embarrassed, felt neutered, were mad as hell and were not going to take it anymore!

I happened to be in Phoenix on election night and was in the hotel lounge when the presidency was announced. We asked a couple of the waitresses (late 40’s / early 50’s) what they thought of the election results. They shared how although they were surprised, they were not disappointed. They went on to say how they felt that all politicians are liars, but Clinton was a crook.

I asked directly why they wouldn’t support a woman for President, as CNN and liberals demanded. They simply said, “I don’t want the first American female elected President to be an embarrassment to all women”. Unlike in Canada with the help of social lefties and the CBC, we got rid of a strong manager of the economy for someone with great hair. From a Canadian perspective, I’d rather have Harper than Trudeau negotiating with Trump over the next four years.

I woke up the next day in Scottsdale to play a round of golf, and a complete surprise to me – there were no zombies or tanks in the streets! At the same time, no one was admitting that they voted for Trump either, however I did hear wails from the Clinton supporters. This election was about people tired of political correctness and tired of the status quo, and looking for an alternative to dirty politics.

So how will this affect public markets in the future? A Trump Administration will be good for the stock market initially however, it will just take one stupid thing said or done, to lead to short term panic and the volatility will re-emerge once again. I see one great opportunity and it’s the energy sector in Western Canada. The Keystone will go through and it will force the federal Liberals to support pipelines east and west. The US consumes 20 million barrels a day and can produce half of it (good for Canada). Trump says he wants Energy independence and embargo OPEC oil (May 26, 2016 speech in Bismarck, N.D.). This is brilliant and was done once before under President Eisenhower at the height of the Cold War. If the US was to do this, Trump says it would result in $700 billion increase in the economy with $30 billion in wages over the next 7 years, with $6 trillion in tax revenue over the next four decades. Imagine, less money needed to fight Middle East wars, less revenues for terrorism and foes, less cost to military and better jobs for North America? How is this bad; the environment? The issue is not oil and gas but coal as the main culprit of North American greenhouse gases.

Since September 2014, we told our clients to reduce their position in energy. Consequently, we have had a 2% exposure to the energy sector since 2015 before the crash. We are now telling investors that it is time to invest in the energy sector. For Trump’s plan to work, he needs Western Canada’s oil and gas which means pipelines and massive infrastructure to increase oil sands capacity. They’ll also need a big investment in Mexico which will need North American technology to help PEMEX increase output.

As part of our 8 Ways to 8% strategy, we have two private offerings in the oil sector that will produce 8% yields, and with some equity participation at exit. In fact, one company has been buying distressed assets and their oil reserve is 50% more valuable than their current valuation. This is a great time to get back into oil if you’re not in that sector or looking for a yield producing investment.

As far as Canada, I’m a little worried if Trump decides to renegotiate NAFTA with PM Trudeau and Min. Dion as our negotiators. The cartoon below says it all. 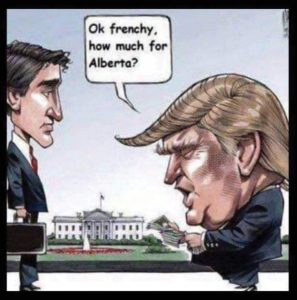 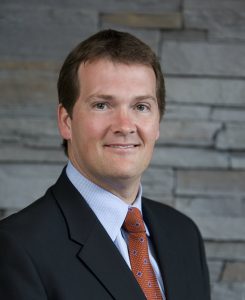